Adelanto Misconduct Attorney Jerry L. Steering has been suing the San Bernardino County Sheriff’s Department since the Mid-1980s, and has no plans to stop doing so anytime soon.

their victims (i.e. the suspect struck my knuckles with his chin). Don’t be another one of their victims. Don’t let them get away with it, by getting paid for what the San Bernardino County Sheriff’s Department did, or are presently doing, to you. Call Police Misconduct Attorney Jerry L. Steering to sue the police, and/or to defend the bogus criminal case being maliciously prosecuted against you.

Jerry L. Steering, is a Specialist & Expert Police Misconduct Attorney, who sues the police and defends bogus “resistance offense” criminal cases that are procured by the police officers who beat-you-up, to shift the blame from them to you for their having to beat you and take you to jail. Adelanto, California, is rife with Deputy Sheriff’s who actually enjoy beating-up innocents for any verbal challenge by you of their authority to detain you, or make you prone-out on the street, or to handcuff you. It’s called “contempt of cop”, and it happens every day in every town in the USA.

Since the supervisors of High Desert Stations (i.e. Victorville, Apple Valley, Hesperia, Adelanto, etc.) are usually encouraging terrorizing the locals, no one is watching the watchman in the High Desert.

If you are the victim of police misconduct and/or are being criminally prosecuted for a bogus criminal offense to shift the blame from the police to you, we can help.

POLICE BRUTALITY IN THE HIGH DESERT.
For whatever reason, police brutality in the Victor Valley has gone off of the charts. The City of Apple Valley, California (Population 70,700), is the hotbed these days for crazed cops, who apparently really take great pleasure in shooting innocents, and beating and false arresting their “prey.” The San Bernardino County Sheriff’s Department contracts with the City of Apple Valley for their police services, and if your a fan of outrageous police shootings, beating and false arrest, Apple Valley is the place for you. In 2015 these violent crazed deputies of the High Desert were caught on video recording viciously beating a man named Francis Pusok who literally attempted to escape from them on horseback. 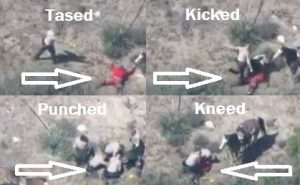 There was a Sheriff’s Department helicopter that was flying over the foot pursuit by the deputies so when the news helicopter was flying over the Sheriff’s Department helicopter the deputies didn’t know that the news helicopter was there. As a result the deputies carried on their vicious and brutal attack of Mr. Pusok, such as the deputy seen literally kicking the surrendering suspect directly in his testicles. See, “DA files charges against 3 deputies in Francis Pusok beating“. Had the news helicopter not been there and secreted by the noise of the Sheriff’s Department chopper, Mr. Pusok would have been charged with at least violation of Cal. Penal Code Section 69; using force and violence to prevent / attempt to prevent public officer from performing duty of their office (See, “Cal. Penal Code Section 69; The Hammer Of Oppression – Police Misconduct Attorney“); standard operating procedure for the San Bernardino County Sheriff’s Department. These deputies know that when they beat, torture or even kill civilians, even totally innocent ones, that San Bernardino County District Attorney Mike Ramos will prosecute their victims with some sort of “resistance offense” to beat them down (i.e. the financial costs and emotional toll of having to defend oneself on bogus criminal charges) to take a plea that will preclude the victim of police abuse from successfully suing the deputies for their constitutional violations. See, “”The “Contempt of Cop Game”; How Well Can You Play?“”. On May 15, 2013 District Attorney Ramos stated as much; that his office will not be dismissed any cases involving “Crimes Against Peace Officers” (“CAPO”) (See, “San Bernardino County DA Launches New Unit For Crimes Against Police Officers“).