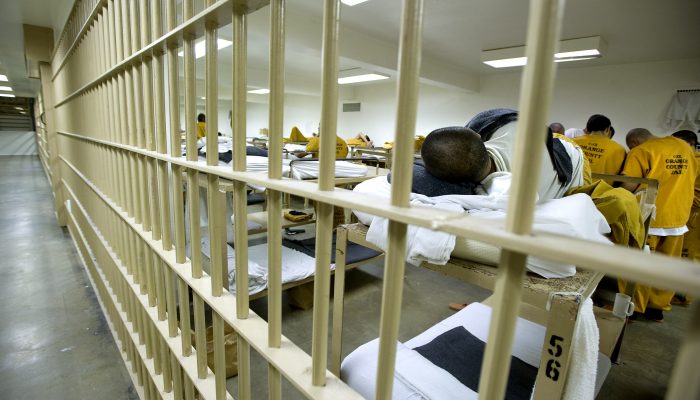 Family Gets $2.1 Million in Jail Death. Jason Gomez was deprived of his psych meds and was given a “Palestinian Hanging” by deputies.

The family of an Orange County jail inmate who died in 2008 after an altercation with deputies will receive a $2.1 million settlement from the county.

The death of Jason Jesus Gomez on April 1, 2008, generated headlines because he was among several inmates who died or were injured after being shot with a Taser by deputies.

The incidents led to a new department policy that  Tasers could not be used on inmates who had been handcuffed or otherwise subdued.

An autopsy showed Gomez died from “hypoxic ischemic encephalopathy,” meaning that oxygen was cut off to his brain. Jerry Steering, his family’s attorney in the federal lawsuit, said deputies placed Gomez in a physical position that prohibited him from breathing.

“He said, ‘I can’t breathe,’ several times. They said, ‘If you can talk you can breathe,’ ” Steering said.

Gomez, 35, was in jail on a 90-day misdemeanor probation violation. He had gone five days without his medication for a psychiatric condition when the altercation occurred March 25, 2008, according to Steering.

Gomez’s mental health had deteriorated to the point where he was placed in the jail’s psychiatric ward. When the nurse finally arrived to give him medication, Gomez fractured her arm, Steering said.

Deputies responded and attempted to place Gomez in a straitjacket, but he threw soapy water on the floor of the cell, so deputies would slip, Steering said.

Gomez also threw his mattress against the bars, hoping to prevent deputies from initially shooting him with Taser darts. Gomez fought and spat at deputies, biting one jailer on the finger. He eventually was overcome and handcuffed on the floor outside his cell.

He was placed in leg irons, put in a wheelchair and fitted with a spit mask.

“One of the deputies pressed the back of his head down, apparently causing problems with Jason Gomez’s breathing,” said a written statement by Steering.

After 20 minutes, deputies noticed Gomez had stopped breathing and had no pulse. Attempts to revive him at the jail were unsuccessful. He was rushed to the hospital and placed on life support, which was unplugged April 1, 2008, Steering said.

Sheriff’s Cmdr. Steve Kea said he could not comment on the Gomez case, but stressed that several reforms have been made to make deputies more accountable when they use force. Such incidents are more scrutinized under the new review system, Kea said.

In fact, Steering praised Sheriff Sandra Hutchens and her staff for “attempting to reform the culture of violence and cruelty practiced by jail deputies” under the former administration.

On March 25, 2008, Jason Jesus Gomez, 35, who was in custody for a probation violation and had been off his medication for several days, began attacking jail employees. As he was being restrained, Gomez repeatedly claimed he couldn’t breath. Deputies soon realized Gomez was right when he literally stopped breathing. He died several days later at a hospital when he was taken off life support.

Now, according to a story in today’s Orange County Register, his family has won a $2.1 million legal settlement from the county.

Gomez was just one of several inmates to be injured or who died inside Orange County jails after being tasered while already handcuffed or otherwise restrained. Specifically, Gomez perished after being placed in a wheelchair used to restrain uncooperative prisoners, apparently because one of the guards was pushing his head down. “He said, ‘I can’t breathe,’ several times,” claims the family’s attorney, Jerry Steering. “They said, ‘If you can talk you can breathe.”

From the Register story, it’s easy to see why the guards placed Gomez in the chair. The fracas started when Gomez, who had just been transferred to the jail’s psychiatric unit for evaluation, broke a nurse’s arm. When deputies tried to place him in a straitjacket, he fought them off by throwing soapy water on the floor and using a mattress as a shield. “Gomez fought and spat at deputies, biting one jailer on the finger,” the Reg reports. He eventually was overcome and handcuffed on the floor outside his cell. He was placed in leg irons, put in a wheelchair and fitted with a spit mask. ”

Because of Gomez’ death and others, the Orange County Sheriff’s Department later prohibited the use of tasers against prisoners who have been handcuffed or otherwise restrained. “Steering praised Sheriff Sandra Hutchens and her staff for “attempting to reform the culture of violence and cruelty practiced by jail deputies” under the former administration,” the paper concluded, a reference to disgraced ex-sheriff Mike Carona, now serving time in federal prison.