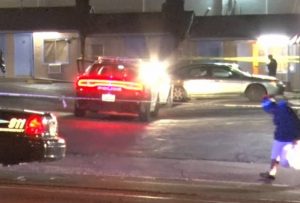 The City of Barstow in Southern California has settled a case involving one of its police officers and the family of one Leonard Angelo Sanchez for $1,300,000,00[1]. The San Bernardino County District Attorney’s Office found the February 25, 2018 shooting of Leonard Angelo Sanchez, in front of his common-law wife and two of his children, to have been justified. See, DA says fatal officer shooting at Barstow motel justified. Daily Press, https://www.vvdailypress.com/news/20181025/da-says-fatal-officer-shooting-at-barstow-motel-justified .

On the evening of February 25, 2018, a “911 call” was made to the police by Margaret Alba regarding the behavior of her “common-law husband”, Leonard Angelo Sanchez. Mr. Sanchez was threatening to harm himself and Ms. Alba was worried that he might do so, so she called 911. The Barstow Police Department officers arrived at the scene at the Sands Motel in Bartow[2], where plaintiffs resided.

When the Barstow officers approached, Margaret told the Officers that Leonard was acting crazy, and Leonard Angelo Sanchez confirmed this by pulling out two long kitchen knives and holding them in self-threatening manner. One of the Barstow Officers pulled-out his taser, and the other his pistol. As both of the officers began giving commands to Leonard to drop the knives, Margaret turned around and walked back inside of the motel room.

Leonard looked at the Officers, who were still shouting at him to drop the knives, and as he turned to walk into the room with the knives in his hands, they contemporaneously shot both the taser and the pistol at Leonard Sanchez. One of the taser darts flew over Leonard’s left shoulder. He wasn’t so lucky with the bullet from Officer William Spiller. The bullet passed through his body and was sufficient itself to kill Mr. Sanchez. As the Officer who shot the taser, Andrew Buesa, yelled out to Officer Spiller that “He’s still wielding the knife”, while Leonard Sanchez was now on his back on his motel room bed, Officer Spiller turned the corner and shot Leonard Sanchez two more times.

Paramedics were called and Mr. Sanchez bled-out at the scene.

The Sanchez family’s attorney, Jerry L. Steering, summed the case up as follows:

“The police over-reacted in the Leonard Sanchez shooting. Officer Buesa held his taser on Mr. Sanchez while ordering him to drop the knives, but Officer Spiller trained his pistol on him. Although, under the circumstances, it would have been reasonable to have tased Mr. Sanchez to  protect Ms. Alba and their children, it was entirely unreasonable to have shot him”.

These days with police shooting cases, unless there was another case so factually similar to the present case, and unless that similar conduct was clearly held to be unconstitutional, the defendant police officers usually are usually awarded qualified immunity from suit.”