DESERT HOT SPRINGS P.D. WAS ONE OF THE MOST BRUTAL AND CORRUPT IN CALIFORNIA.

Desert Hot Springs Police officers are acutely aware of what they can and cannot get away with, and they all know that they can beat, falsely arrest, maliciously prosecute and even kill civilians, and get away with it.

Lt. Henderson was apparently disappointed by not being able to beat-up another civilian, so while Michael Sanchez was lying on the ground, crying in pain, Lt. Henderson did a football style place kick in his testicles and actually killed him.

“THE LETTUCE EATERS” vs “THE MEAT EATERS”.

DHSPD was so bad in the 2000s that they actually had two factions; “The Lettuce Eaters” and “The Meat Eaters”. “The Meat Eaters” were head-up by Lt. David Henderson. Lt. Henderson was so brutal that when he went out on patrol he always had two cans of pepper-spray on him, because one can was not enough for one of his duty shifts. No joke.

In order to pass their probationary period as new DHSPD Officers, they had to “engage” if they worked Lt. Henderson’s day shift. “Engage” meant to beat-up some innocent badly, and to thereafter frame them for a crime against the officer.

Lt. Henderson was eventually Indicted by the U.S. Attorney’s Office for torturing prisoners and reached a misdemeanor plea deal with the government. 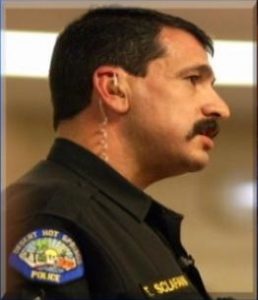 DHSPD Sgt. Anthony Sclafani, one of the leaders of The Meat Eaters was sentenced to 4 years in federal prison for torturing inmates and arrestees. Sclafani tortured a gang member and a DUI arrestee; snapping her ankle, dousing her with pepper-spray, and passing around the taser to his subordinate officers to all take a turn zapping her.

DHSPD was so corrupt that while criminal charges were pending against Sclafani, they took him of the streets and had him vetting new police officers. 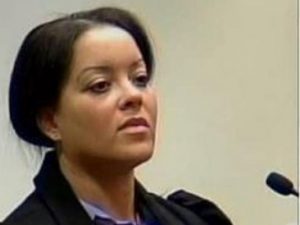 Andrea Heath was a DHSPD Detective. When the FBI came to investigate the torturing and beating of arrestees and innocents by the DHSPD, Detective Heath told the FBI the truth; that DHSPD was a brutal, corrupt and even murderous police agency.

She was retaliated against and eventually wrongfully terminated. Her fellow officers ostracized her and made racial comments about her. They took the bullets out of her AR-15 and would not back-her-up on shooting and other dangerous calls. The literally drove her to commit suicide.

To make things worse, Riverside County District Attorney Mike Hestrin has created a new Crimes Against Peace Officers Unit. The role of that Unit is to falsely and maliciously prosecute the innocent victims of police misconduct, to prevent / preclude those innocents from suing the police. It is shameful.

Mr. Steering has represented many bogus criminal “resistance offense” cases (i.e. Cal. Penal Code Sections 148(a)(1) (resisting arrest) and 243(b) (battery on a peace officer) in the Coachella Valley since the mid-1980s.

Local District Attorney’s are simply not competent to criminally prosecute the police and will use any excuse and will find any justification for an Officer-Involved-Shooting. If you don’t believe this, then just take a gander at the ever growing list of bad-police-shootings that have been found to have been justified by the Riverside County District Attorney’s Office in the past few years (See, the Riverside County District Attorney’s Office’s Press Releases). None of the 963 fatal police shootings of civilians in 2017 ended-up with the prosecution of those officers who unjustifiably killed a civilian.

It’s not easy to get justice for resistance offense cases; civil or criminal. Jerry L. Steering, Esq., has been doing just that since 1984.