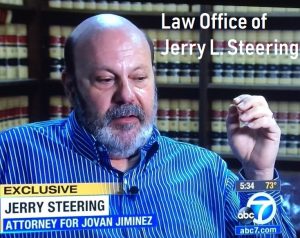 DON’T GET FRAMED; RATHER GET PAID FOR YOUR POLICE BEATING, FALSE ARREST AND MALICIOUS PROSECUTION.

Jerry L. Steering, is a Police Misconduct Attorney who practices law in Irvine, California and through out Southern California. Mr. Steering is a

Specialist and Expert in Suing the Police for Violating your Constitutional Rights such as for Excessive Force / Police Brutality and Shootings, False Arrests, Malicious Prosecutions, Canine Maulings, Wrongful Death claims, and for Concealing & Destroying Exculpatory Evidence; all since 1984.

THE IRVINE POLICE DEPARTMENT HAS BEEN BEATING INNOCENTS AND FRAMING THEM.

RANK AND FILE IRVINE POLICE DEPARTMENT OFFICERS DO NOT WANT THEIR CONDUCT TO BE RECORDED.

As shown below, police abuse of these resistance offenses, coupled with our appellate courts basically allowing “Officer’s Safety” concerns to trump your search and seizure rights, have created a truly modern police officer who is brutal and who will frame you to shift the blame for his / her use of force upon you. See, The “Contempt of Cop” Game; How Well Can You Play.

Mr. Steering has been suing the Irvine Police Department for over thirty years, and has obtain substantial awards / settlements from Irvine for unreasonable force and false arrests. He has obtained $400,000.00 from the City of Irvine for a sex assault by former Irvine Police Officer David Park. See, Ex-Irvine officer acquitted.

If you have been the victim of Police Misconduct, including an officer from the Irvine Police Department, we can help you.