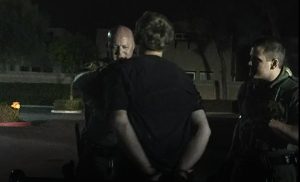 Orange County supervisors agreed Tuesday to pay $500,000 to settle a federal lawsuit alleging two deputies tased a man who called 911 to complain they were harassing him.

The settlement was approved in closed session and later accepted by attorneys for David Andrews.

The civil rights lawsuit alleges Deputies Stephan Harder and Robert Seamans used excessive force on Andrews, who was sleeping in his car in the parking lot of a Yorba Linda gym in the early morning hours of Aug. 2, 2018.

According to the lawsuit, Harder and Seamans — who generated news stories in 2017 for using his body to shield civilians in the  Las Vegas shooting at a musical festival — saw the car while on patrol and stopped to investigate. They walked up to the vehicle with guns drawn and flashlights out, waking up Andrews. They ordered Andrews out of the car and then questioned him about what he was doing. They also demanded to see his identification.

Andrews, who had just broken up with his live-in girlfriend, told the officers that he had been given permission by the business owner to sleep in his car on the property. Andrews then asked why he was being rousted and why they needed his identification, the lawsuit said.

The deputies eventually released Andrews and left. After they were gone, Andrews called 911 to complain that the deputies had harassed him.

While he was still on the telephone, Harder, a 10-year veteran, and Seamans, a nine-year sheriff’s veteran, returned. The suit says they told Andrews they were going to arrest him if he didn’t stop complaining. Andrews continued his complaints to the 911 operator.

The deputies put on their gloves and “advanced aggressively” on Andrews, who begged over the phone for help, said the suit. They used a Taser on him as he implored the 911 operator, the suit said.

The deputies arrested Andrews for filing a false report and took him to jail. Prosecutors later declined to file charges.

Andrews originally was seeking more than $6 million in damages.

“It’s another case where the cops didn’t know the law,” said Andrews’ attorney, Jerry Steering of Newport Beach. “They feel it’s a crime to not ID yourself to a cop.”