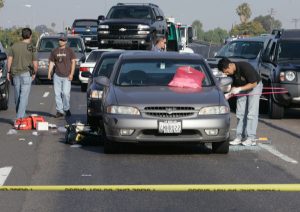 Investigators gather evidence at the scene of a gun battle on the 91 freeway between Brookhurst and Euclid, in Anaheim. June 22, 2008.

Norma Cortez recovered $300,000.00 from the City of Anaheim for using motorists on the 91 freeway as human traps for man sought by Anaheim Police.

ANAHEIM – The city has settled a federal lawsuit filed by two Anaheim women after one of the innocent bystanders was injured during a freeway shootout, the women’s lawyer said.

Traffic came to a halt because Anaheim police were trying to catch David Michael Abrams, a parolee who authorities said shot a police officer the morning before.

Police encountered Abrams while investigating an indecent exposure report at Western Raffles Inn & Suites. Police said Abrams shot one of the officers at the motel, and then fled in a Honda Civic.

Authorities spotted him driving on the I-605 after midnight, and then followed him onto the east 91 freeway.

Abrams, trapped by the traffic, came out of his car and shot at officers. Police returned fire, and several bullets clipped the Gomez’s car – which was next to Abram’s vehicle, Steering said.

Norma, who was injured in her abdomen and shoulder, was treated and released from UCI Medical Center in Orange, he added. She and her mother filed the lawsuit in January 2009.

Abrams, 40, of Long Beach was killed in the hail of bullets. He had been released from prison in 2006 after serving 10 years for burglary related charges and was placed on parole, according to Department of Corrections and Rehabilitation records.