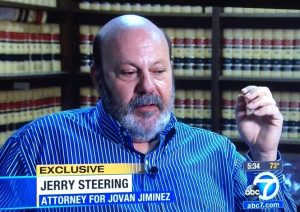 Anaheim Police Misconduct Attorney Jerry L. Steering serves the City of Anaheim, California and throughout Southern California. Mr. Steering has been suing police officers, and defending bogus criminal cases since 1984. Mr. Steering represents the victims of ”Police Misconduct”, such as the victims of the use of excessive force, false arrests and bogus criminal prosecutions. Call: (949) 474-1849.

ANAHEIM IS RIFE WITH POLICE MISCONDUCT.

Anaheim, California is rife with daily police outrages. As most police agencies do, if you give them an inch they will take a mile. Unfortunately, Anaheim Police Department officers often beat, shoot, tase, torture many innocents and other, often for career advancement and pure sadistic pleasure. This is not left propaganda. This is the sad reality of our times. After all, the police state isn’t the police; it’s the public. It’s the public approval of police outrages by voting for police defendants in civil rights case, and by voting to convict true innocents based upon straight-up lies in court by police officers.

Anaheim is rather unbiased in their treatment of civilians. No matter your race, color or creed, all are treated equally poorly and oppressively. Anaheim police officers learn early on that they literally can beat, falsely arrest and procure the filing of a bogus criminal action against those whom they abuse. This not some lefty propaganda or overstatement of the state of our country. It is reality.

Anaheim PD was the leading agency that literally created the Orange County Snitch Scandal; a massive scandal involving Anaheim PD and using illegal jailhouse informants to obtained confessions from inmates at the Orange County Jails. They used real life former Mexican Mafia gang members, who were inmates in the jail and on the City payroll, to literally coerce and scare inmates into making incriminating statements; confessions that were often false, made simply to avoid violence by the Mexican Mafia.

Some police officers can handle the awesome power over civilians, and some cannot. The Anaheim Police Department has its share of those who cannot.

If you are the victim of a good old fashion police beating, false arrest or malicious criminal prosecution by Anaheim Police Department Officers, we can help. See our Article:

“What To Do If You Have Been Beaten-Up Or False Arrested By The Police“.

Click on “Home”, above, or the other pages shown, for the information or assistance that we can provide for you. If you need to speak with a lawyer about your particular legal situation, please call the Law Offices of Jerry L. Steering for a free telephone consultation.